Down at the Shark Anomaly Center (or SAC as it's commonly called for short), a group of sexy marine biologists probe the secrets of the greatest predator known to man! They soon discover the ferocious sea creature emits an erotic sound that no woman can resist. But will their newly unearthed 'shark-waves' eventually take them to new heights or simply turn them all into irresistible 'shark babes' bent on overthrowing mankind with unbridled sensuality? Come explore the extreme depths of the unknown with the hottest ladies this side of the equator - as busty shark experts breakdown the mating rituals of the ancient species, while creating a few new rituals of their own. Lead by the shapely world-renowned Sharkologist Dr. Loretta Quivers, the girls take their research to new levels of flesh-filled excitement. So batten down your hatches and prepare to dive... you are about to discover what really happens when Shark Fever is cast upon this crew of unsuspecting researchers. SHARK BABES is... (IMDB user Daniel Joespeh) 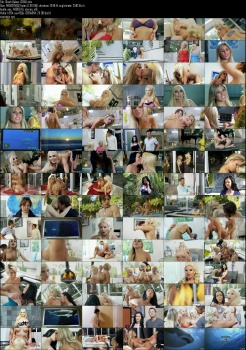