Meet the Karoli family. Despite severe financial problems, the elderly matriarch of the clan (Pupita Lea Scuderoni) insists they hang on to their massive castle home, which has been in the family for three centuries and at one time was used as a monastery. Son Andrea (Enzo Fisichella), who lost his wife Daniela years earlier, wants to sell the castle so they can get out from under their debt, but he's broke and powerless. Brother Adolfo (Giuseppe Marrocco), who also lives there, has plenty of money, but he's unfortunately suffered some kind of brain injury that's left him crippled and unable to speak. As a result, all of his finances have fallen into his wife Nais' (Patrizia Webley) hands and Nais isn't a very nice woman. She is, however, fully aware that she's a huge whore and seems to take great pride in that fact. Mama Karoli wants Andrea to seduce and marry his brother's wife so that they can get their hands on the money. Still pining for Daniela and believing Nais is a "low-grade slut" anyway, Andrea refuses... at least at first. And that leaves poor Bimba (Katell Laennec), Andrea's 16-year-old daughter, who has lived her entire life in the home completely isolated from the outside world. In fact, she's not once left the castle grounds and the repression and naivety leave her quite open to malicious and evil influences that happen to be lying dormant inside the castle just waiting to strike out. (http://thebloodypitofhorror.blogspot.com.tr/2014/01/malabimba-1979.html) 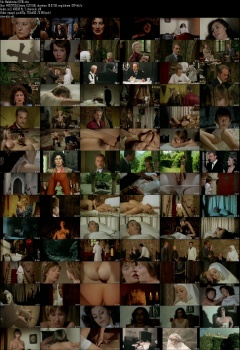